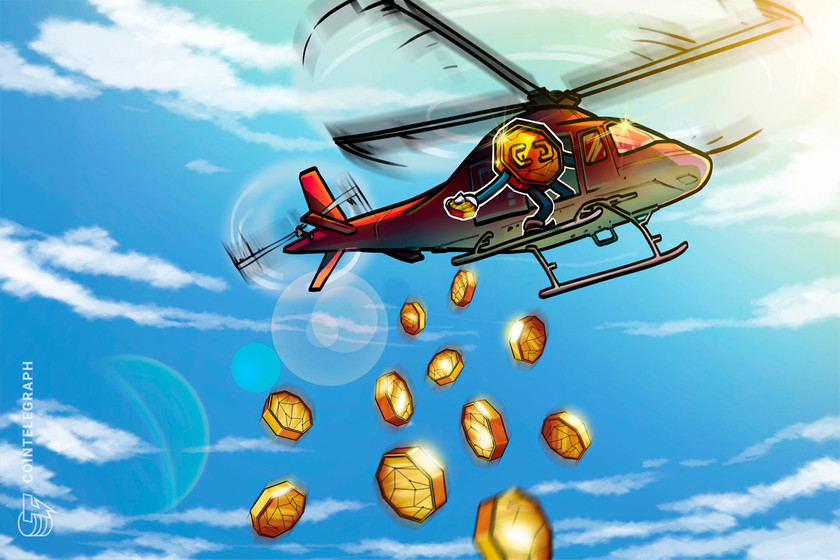 China’s pandemic-hit economy needs all the help it can get after a surge in COVID-19 infections triggered mass lockdowns across the country. In an attempt to revive consumption, the southern city of Shenzhen used Beijing’s central bank digital currency, or CBDC, to airdrop free money to local residents. A similar strategy was used in the northern Hebei province, where even more digital yuan was deployed. Think of all the things governments can do when they have full control over fiat money on-ramps.

This week’s Crypto Biz newsletter explores China’s helicopter CBDC strategy, the latest funding news from the world of blockchain and whether Apple is getting closer to integrating nonfungible token (NFT) technology.

The biggest funding news of the week comes courtesy of Binance Labs, which announced plans to allocate a whopping $500 million to Web3 and blockchain startups. The new funding initiative, launched in partnership with DST Global Partners and Breyer Capital, will focus on incubation as well as early-stage and late-stage growth companies. Such mega-funds are nothing new for crypto. But, it’s interesting that venture capital is pouring even more money into the industry at a time when crypto prices are plummeting. Things aren’t always what they seem on the surface.

What is #Binance Labs?

It’s the venture capital and incubation arm of #Binance that identifies, invests, and empowers viable blockchain entrepreneurs, startups, and communities.

Goldman Sachs’ foray into the crypto market appears to be deepening every week. The latest news is that the United States banking giant wants to onboard some of its derivatives products into FTX.US, one of the leading crypto derivatives exchanges. The reason for this integration, according to financial news outlet Barron’s, is that Goldman wants to offer crypto derivatives products using its own tools. It looks like Goldman’s derivatives customers will be joining retail in getting wrecked during the next major market downturn. Or, perhaps I’m being too negative? Read about liquidation cascades before you decide.

You’ve heard of helicopter money before. Well, the city of Shenzhen is making it a reality by airdropping 30 million digital Chinese yuan (e-CNY) to local residents in an effort to boost consumer spending. To qualify for the airdrop, locals must register with the food delivery app Mietuan Dianping. If selected, they’ll have the ability to spend their digital yuan at more than 15,000 merchant terminals. For better or worse, you’re getting a glimpse into how governments will use central bank digital currencies to achieve macroeconomic objectives. But yes, there are plenty of downsides to CBDCs, too.

Apple’s upcoming Worldwide Developer Conference, also known as WWDC, has sparked interest from the crypto community amid rumors that the iPhone maker was looking to integrate NFT trading cards — the rumors aren’t unfounded, either. The fanatics over at MacRumors apparently clicked on the Memoji characters being showcased on new Apple devices and software models and discovered three trading card characters available to be claimed. The good news is we won’t have to wait long for the rumors to be either confirmed or squashed as WDCC takes place next week.

Don’t miss it! How does the Fed impact your crypto?

There has been a lot of talk about the Federal Reserve and interest rates over the past few months. After lying to us about inflation, the Fed has been forced to do a complete U-turn on monetary policy to bring down cost pressures. So, whether you like it or not, the cabal of central bankers who meet eight times a year have a major impact on your portfolio — and this includes crypto. In this week’s Market Report, we explain how the Fed is pulling the strings. Click below to watch a full replay of the show.

Crypto Biz is your weekly pulse of the business behind blockchain and crypto delivered directly to your inbox every Thursday.